After sunning in the French Riviera in Nice and Monaco it was time to head southwest to Italy – the land of pizza, pasta, fine wines, and endless gelato.

I chose to stick to the southern part of Italy in order to maximize what I was able to see and minimize the amount of time spent in transit. This meant, unfortunately, Milan and Venice were off the agenda. Instead I would focus on Florence, Rome, Naples and the Amalfi Coast. The point of this tour isn’t to see everything. It’s a targeted (and sometimes very impromptu) trip around the world to see places I’ve never seen, experience life as much as a local as possible, and ideally return to some of these places later in life.

I opted to break up the 8 hour long train journey from Nice to Florence and stop overnight at roughly the halfway point in Genoa, Italy. Genoa remains an active port city and doesn’t see nearly the number of tourists as the many much more famous cities of Italy. Most of the travelers I met were like me, not in too much of a rush and for varying reasons wanted to check out the city. If you’re not in a rush and want to split up the trip, I would highly recommend a quick stopover.

Leaving the seaside of France

Slightly more gritty than the posh cities of Nice and Paris, Genoa felt more a bit more real. Like a city people actually live in and less of a showpiece for tourists. It’s also safe to say that the global financial and Eurozone crises starting in 2008 have had more of a lasting impact on smaller and more rural cities than they have on the major tourist hubs. There is more graffiti, more shuttered shops, and a general sense that austerity measures are having an impact. That being said, I felt completely safe in Genoa and I enjoyed seeing a real city. 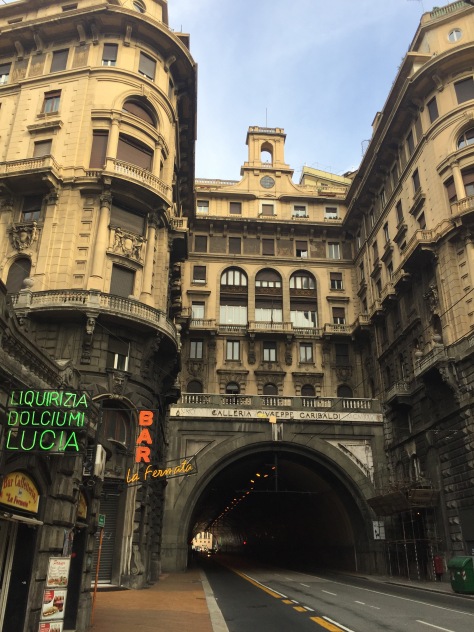 The architecture is distinctly European and being built on a seaside hill, you get great views from various points in the city. It’s also very active so watch where you step – you may almost get run down by a scooter using the footpath as a highway (or so I’ve been told…)

Genoa has been an economic center since the middle ages and many of the palatial homes along via Garibaldi  have been repurposed into museums or attractions you can visit. Or you can do like me and just have a wander around until someone tells you to leave. 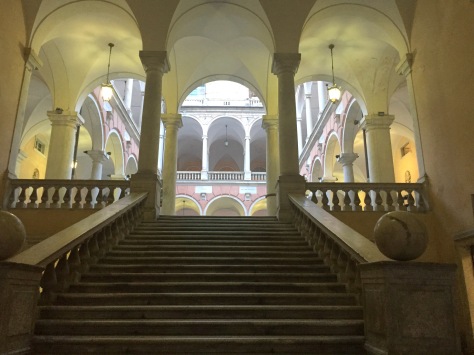 Genoa’s main touristic claim to fame is as the birthplace of Christopher Columbus. You know, the guy who may or may not have been the first to discover America (it was actually the Vikings…). Regardless, he was born in the town and there are many statues and relics dedicated to him and his legacy. You can even visit his actual birthplace from the 1400’s.

As an active port city, the focal point is the harbor. There is a bustling night market including many food vendors, tourist trinket sellers, and everything else you would expect to find. Open containers are ok (as with most of Europe) so it was fun to wander around, beer in hand, and enjoy the warm evening air and sea breeze.

A pop-up street food festival at the night markets – Am I in America?

Recreation of an old merchant ship – tourist trap on the seafront

Despite seafood being the specialty, I opted to try something a bit more unique. The special of the evening was lumache marinara. Yep, that’s right – snails in tomato sauce. Served over crusty bread and plus a cheeky 1/2 liter of sparkling red. Including a side salad, it set me back about €13. I was a very happy camper.

As always, dinner is best followed by something sweet. In this case, some amazing gelato (surprise, I know)

I was unaware that Genoa is a university town and after 10pm, the town came alive with students packing the large plazas and narrow laneways of the old quarter (a UNESCO site). Just hanging with friends and enjoying the warm summer night with a few beers and banter. 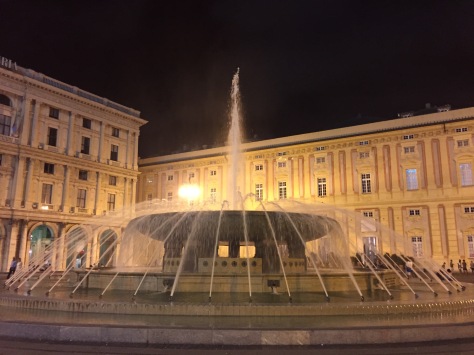 Piazza de Ferrari – one of the main plazas in Genoa 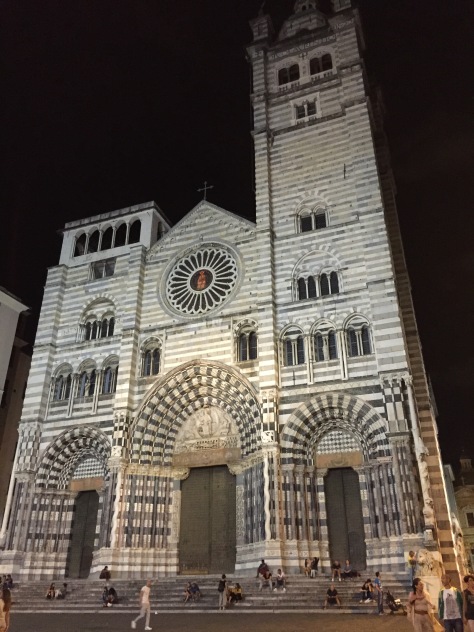 For nightlife, the hostel owner recommended I try out a small craft beer bar located in the labyrinth old quarter.

After a few misadventures with Google maps and no wifi I was rewarded with finding Scurreria, an absolute gem.

Strangely, and the norm in Genoa, was that people rarely stayed inside the pubs. Built into old brick buildings, I can’t blame them. It was usually hot and stuffy and much nicer outside in the laneways. The only warning I can offer is that locals live above the pubs and raucous behavior is dealt with by buckets of water being thrown on patrons rom floors above. Apparently, sometimes it’s not only water… ::gross::

That sums up what was just under 24 hours spent in Genoa. I enjoyed seeing the city and was ready for the next stop, Florence.

If you have any questions about things to do in Genoa, feel free to drop me a line.