I talk regularly about finding inspiration for travel. For me, I always find inspiration from a bunch of different sources. Sometimes it’s seeing a destination in a guidebook. Other times, it comes down to ticking something off my ever growing bucket list. It can also be seeing pictures from a friends’ vacation. The list goes on an on. Sometimes though, it comes down to nothing more than a little spontaneity and finding a really cheap flight and clicking that “Book Now” button. I am a HUGE fan of really cheap flights.

So why Byron? Well, I’d always heard good things about Byron Bay. Nothing specific really, just a lot of “Oh, you have to go there” or “I love Byron”… When I saw roundtrip flights for $100 I just clicked that little “Book Now” button and left the rest to fate and some haphazard planning. Thankfully, my buddy Rob was a willing partner in crime so I had some company.

Byron is a sleepy little surf town a few hours north by plane from Sydney. Situated on the coast, it’s known for surf life, backpackers, organic food, and also has a large hippy influence. Just like how the hippies left San Francisco to Seattle and Portland – the same goes for the exodus from larger town in Aus to Byron.

Since this was just a plan-as-you go weekend jaunt I’ll stick to the highlights.

I enjoyed the coastal walk so much I did it twice over the three day visit. Starting from Main Beach, it leads you east along the waterfront. All in, budget about 2 hours. 3-4 if you’re like me and take a million photos.

With the occasional sets of stairs for some added fitness

A lookout from the summit

Once you near the end of the track, you are taken to an observation area marking the Most easterly point of the Aussie mainland. I can’t think of another time I was at the edge of a continent… Well, check that box off. Although now I may need to travel to the edges of continents more often. Is that even a “thing”?

Even though we got most of our photos, my buddy Rob (im)patiently waited for the area to clear so I could use the fotopol.

It’s only the most awesome thing this (usually) solo traveller had ever seen. You attach your camera, set the timer and go. This is far better, and more level, than my usual method of stacking rocks, positioning my camera, and hoping I catch the shot without my camera taking a header into the ground.

Ok – It’s only me with the fotopol obsession. Moving on.

Coming back, there was another lookout point and I wanted to get a shot before we lost light 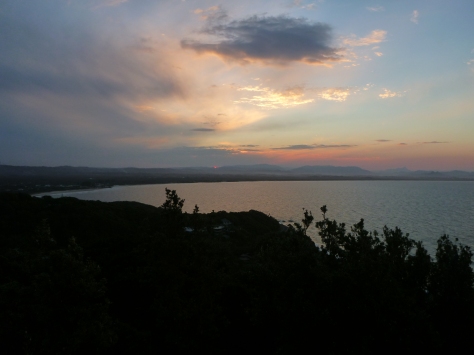 Another attraction is the Cape Byron Light House. It’s a fully functional light house warning passing ships of the peninsula. Although if you run aground – at least you hit “The most easterly point of the Aussie mainland”…

From any angle – it’s a stunner

The colour scheme reminds me of those iconic buildings in Greece 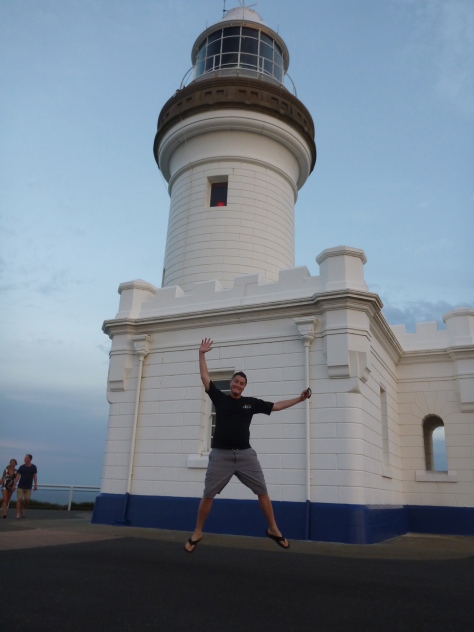 Goofing off – waiting for the sun to set

Truly, a sight to be seen 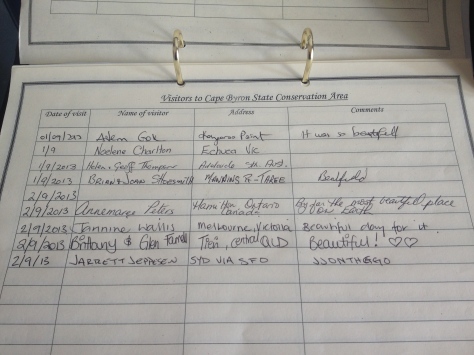 I had no idea the amount of unique wildlife I would see during my visit. This was an unexpected surprise.

A migrating humpback whale making its way from Antarctic waters to the tropics. Since the coast juts out, the whales swim much closer to shore allowing glimpses as they breach.

I saw at least 10 over an hour period just sitting on the shore.

Don’t worry – that’s not a shark. A local pod of about 200 bottle-nose dolphins call Julian Rocks near Byron home. They regularly swim near the surfers and occasionally can be seen catching waves themselves.

I was more than excited when I saw this little fella walking around. It’s a juvenile echidna. This one was super clumsy and was looking in every nook and cranny for some lunch (bugs). 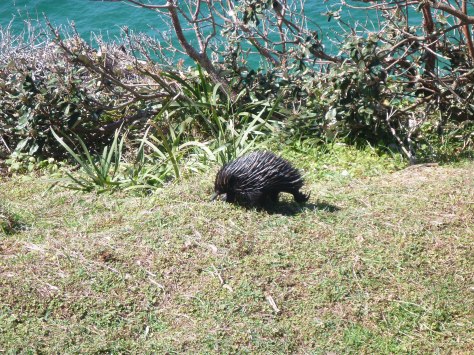 It entertained me for the better part of a half hour

Not to be left out. The aptly named Main Beach lies at the end of the main drag of shops, cafes, pubs, and art galleries. It’s a great place to catch some sun, watch some surfers, and get a feel for the chill vibe of Byron.

I found it’s also a nice spot to relax while enjoying the “best fish and chips from” Fishmongers Cafe. They didn’t disappoint. Get the takeaway option – it’s far cheaper than eating in. 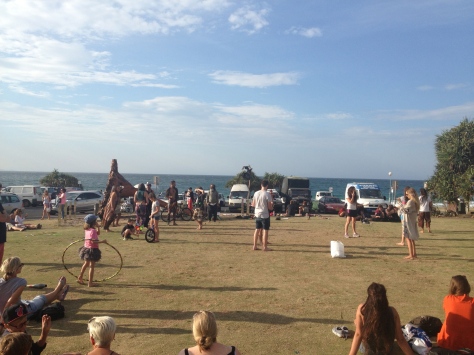 Not to be left out, the grassy area above the beach if frequented by the local hippy scene. Music pumps from a converted campervan with concert speakers, people yoga, hula-hoop, and the faint scent of the local “herbal remedies” linger in the air.

A few items by themselves garner special mention from the trip.

If you’re searching for organic food or quirky art – the Byron Saturday markets are where it’s at. 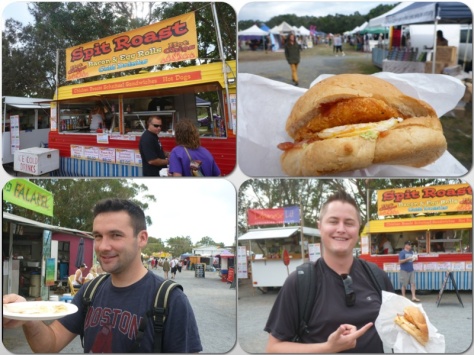 The brekkie is also really good. Whether you’re after a fry up or something sweet.

A great way to spend a few hours on the water. We didn’t see anything – which was weird – but as a bonus they had a “guarantee” so I get to go again for free.

If you like live music, cheap drinks, doing the “Byron Bay boogie”, and dancing with women more than twice your age – you are in luck. We had a great time here hanging with the locals. 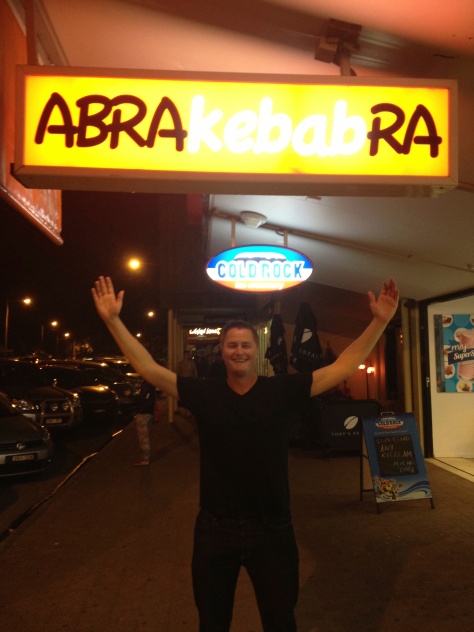 Finally, one last piece of wisdom from Byron:

2 thoughts on “A weekend in Byron Bay”