After checking out Bali, I made my way onward across the Bali Sea to the Gili Islands. The Gili’s are a series of three small islands that sit off the coast of Lombok, the next largest island to Bali. You can just make them out below. They are known for nice calm beaches and some really great scuba diving. I’d heard about them from other friends I met travelling and was really looking forward to checking them out for myself.

To get there, you have the option of a short and cheap flight or a longer and more expensive boat ride. Given that the local airline doesn’t exactly have the greatest safety record I opted for the boat.

Spending two hours on a boat by yourself affords a lot of time to take photos. 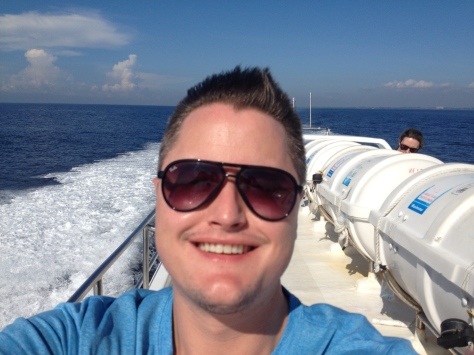 The boat made a quick stop off on Lombok. Here’s the island and one of the many live aboard ships that take tourists on multi day adventures. I believe this one goes to Komodo and back over 5 days.

During the ride, I started up a conversation with a girl sitting on the roof of the boat with me. Her name was Sara and she was a Naval nurse based in Japan. This was her last trip before moving back to the US and leaving the Navy.

Time flew as we shared stories about our backgrounds, families, travels and other funny stories from our pasts.

The boat then dropped off on each of the much smaller Gili Islands – this is the middle one – Gili Air. Known to be the more high end and less populated option.

I was headed for Gili Trwawangan (Gili T to the locals) where there is a bit more of a scuba diver/backpacker vibe. 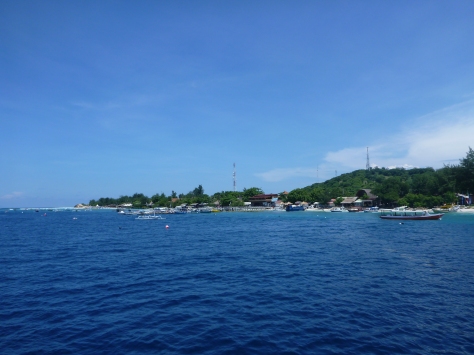 Arriving into Gili T, you realise that it is far more active then the other sleepy ones we just passed. Hard to see here, but the water is an incredible blue and very clear.

Motor vehicles are prohibited on the Gili’s which was a nice break from the seemingly millions of motorbikes and scooters everywhere on Bali. Here, you have three transport options 1) walk, 2) rent a bicycle, or 3) take a horse drawn cart.

The locals decorate their carts in many colors with flowers and other kitch bolted all over. This is the Gili version of a taxi rank.

There is a single dirt path around the island perimeter and here you see  backpackers all loaded up riding around.

On recommendation form the local dive shop I booked a room at the Kelapa Kecil (Little coconut in Bahasa). It’s only three rooms that open up to a private pool and look out over the water.

It was hot, and after travelling all day I wanted nothing more than to chill out and sit in the pool.

The rest of the day was spent getting to know the other guests who were all in their twenties. One, a doctor from New Zealand had her own room and the other bungalow was shared by four expat English teachers from Hong Kong.

All in, a really fun group. The teachers decided to get henna tattoos from a local guy so we spent the afternoon getting inked up and having a few beers and swapping stories.

One of the many island cats relaxing on a sculpture

After grabbing a casual dinner on the beach, we changed and decided to check out the nightlife. It didn’t disappoint. The six of us at Blue Marlin’s Monday night party. 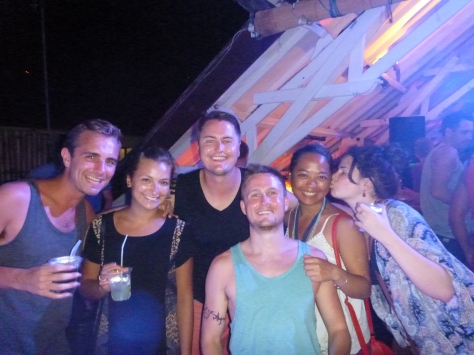 It was an awesome night.

I met back up with Sara the next day and decided to have a calm one and explore the island. But first, breakfast.

The view from breakfast wasn’t bad either

After filling up, we mounted our rental bikes with snorkelling gear in hand and headed off around the island. 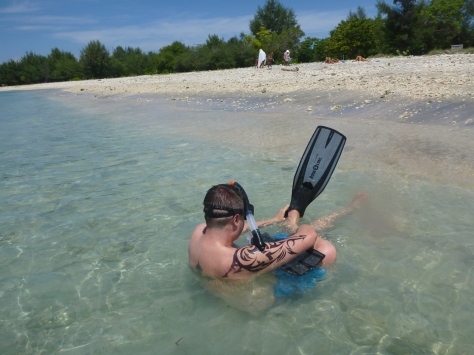 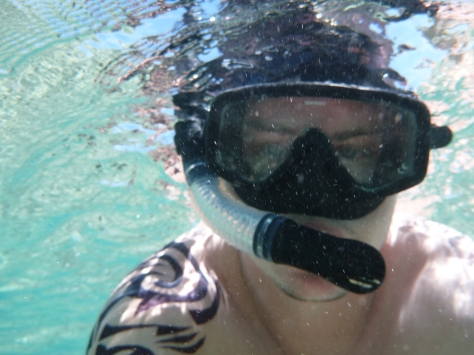 Fins on, it was snorkel selfie time

There were some pretty great corals and marine life right off the beach where the water was max maybe 10-15 feet (3-5m) which made it ideal for snorkelling.

We lucked out pretty quickly by finding a large green turtle which are really common in the Gili’s thanks to local conservation efforts.

I wanted a photo – he wanted sea grass – less than ideal 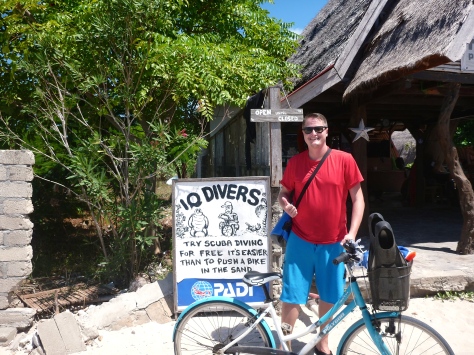 We opted to take the signs advice and take a break before pushing our bikes further through the deep sand.

Relaxing and having a drink in an overwater restaurant

The view was incredible

It only takes maybe 40 minutes to circle the island but we stretched it out into a half day.

For the most part it was just ride, swim, ride, snorkel, etc. 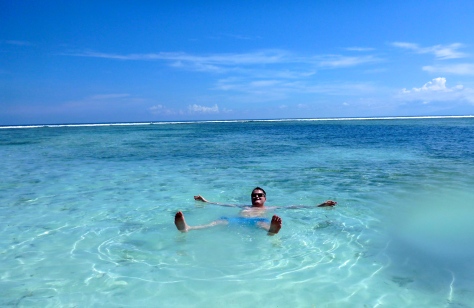 The five days I spent on the Gili’s were spent relaxing, eating, drinking, and getting to meet new people. Due to an ear problem I wasn’t really able to SCUBA dive which was a bit of a let down. The funny part is, I didn’t feel like I missed out. I had a great time with some amazing new friends who I still keep in touch with.

This is getting long so I’ll end with some other highlights of the time spent on the Gili’s. 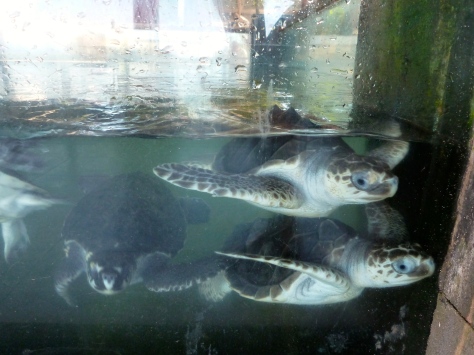 Spending time with the baby turtle hatchlings at the turtle sanctuary. They rehabilitate injured turtles and also keep the babies in tanks until they are large enough to have a better chance of survival on their own. They congregate at the tank ends closest to the water. It was really cool seeing their innate knowledge to go for the ocean.

An amazing rainbow across the sky after a midday storm 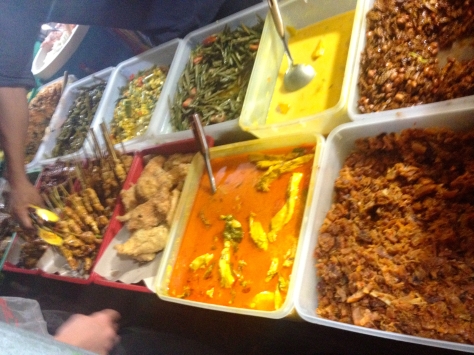 A whole tray of food from the street vendors. Pretty sure this cost me about $3 and it was delicious. I also didn’t get sick – so bonus.

Spending time with new friends. Me, Sara, and the crazy Aussies Mick, Tim and Tom.

Taking in the local customs and trying out “Jiggy shots” which is where you pour a powdered energy drink in your mouth and chase it with a shot of vodka. Not too bad really. 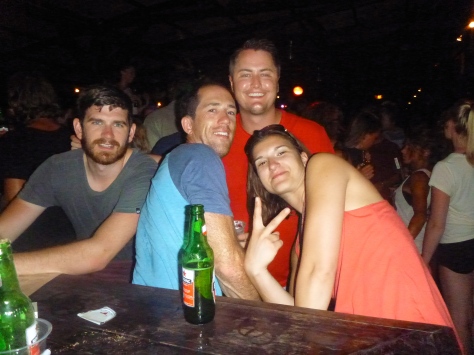 Nights out with new friends 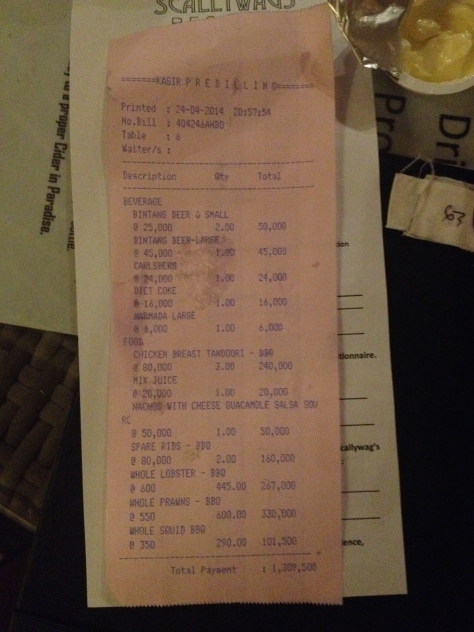 Having a $1.3 million rupiah dinner. That’s about $120 USD and was seafood dinner for six people at the nicest restaurant on this island.

Looking back, the part I think I will miss the most are just the calm evenings sitting at the Sunset Bar chatting about the day and watching the sun set.

For great beaches, chill people, late nights, and water sports the Gili’s are a winner.