I’ve taken a bit of a break from blogging and instead been soaking up the Spanish sun and embracing the siesta (and sangria) culture.

I’ll have to break Paris up a bit as I spent 5 days there and have a variety of things to talk about. I arrived in Paris via Brussels. After a big night out celebrating with some new friends I laid low pretty much most of the first few hours and instead writing the last blog post and getting to know the quite social folks at my hostel. I was expecting to not really like Paris. You know, it’s always called a city for lovers and yada yada. Well… I was traveling solo so it was more about the French immersion.

This will be a short one – I just want to share a few pictures of Paris at night. One of the guys at the hostel had done a free walking tour and opted to buy a ticket on the night river boat cruise down the Seine. It sounded interesting and he invited me along. I then turned around and invited my room mates so it was a happy foursome.

Since this time of year it doesn’t get dark until about 9pm, the cruise was set at 10pm which also coincides with being on the water for both the Eiffel tower light shows at 10pm and 11pm. I believe the lights go hourly until midnight.

Well, safe to say we left the hostel a bit later than we should have and underestimated the Paris subway system. We took the first train a few stops and then impatiently waited on the platform to catch the second train. A few minutes late on arrival, the train didn’t open the doors on our side of the platform. IT sat there for 2 minutes and then left. Begin the “oh crap, we’re going to miss the boat”. A quick look on Google maps and we were slightly closer than expected. We decided to run it. Well, it went well for the first half mile but with a few of us in flip-flops it clearly wasn’t going to happen.

My personal highlight was sprinting frogger style across the Arc de Triomphe roundabout. Also known as one of the most unsafe intersections in the world. There is said to be a traffic accident every 20 minutes and no insurance company will cover you for driving inside the circle.

So here’s us – making a mad dash across it – with the French blaring their horns. Happy to say we safely made it.

The Arc is massive and very impressive at night.

We ended up making it to the Eiffel Tower and arranged our tickets to depart at 10:30. So all ended well and we got a little exercise. 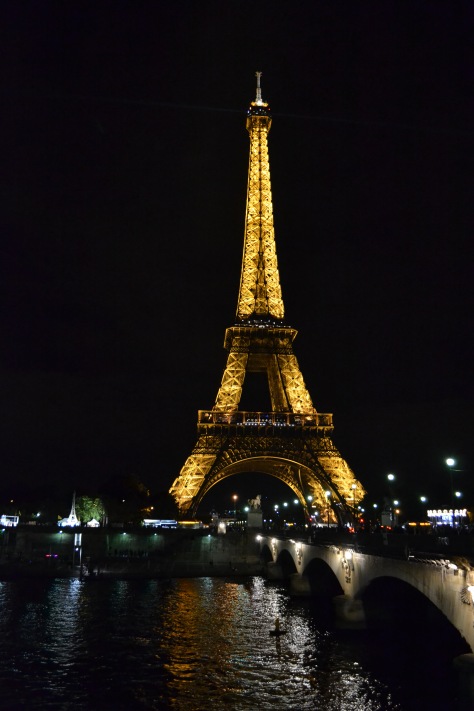 My first ever view of the Eiffel Tower. It is super impressive and beautiful at night. Also fewer tourists and beggars/scammers as compared to daytime.

When I travel I love trying to assimilate as much as possible. Lets’ just say doing a Seine river cruise isn’t really the way to engage with locals… However, Parisians love to hang out along the river and we witnessed many couples with a bottle of wine or groups gathered to dance in everything from proper tango and flamenco to something that borderlined as a rave. 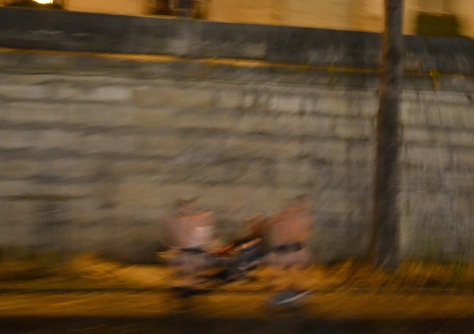 Bad picture, but this was a few French teens dropping trou and giving us a full moon

Show’s over, but what a great night with new friends. I took this while indulging in a French crêpe

Well, this was just a sample of my time in Paris with more to come. There are still museums and landmarks… and food!

If you have any questions about things to do in Paris feel free to drop me a line.

One thought on “Paris by night”