After about 15 “JJ going away” events it was finally May 10th and time for me to say goodbye.

Let’s start with my last day in San Francisco. It was a very clear spring day with slightly chilly but fantastic (for SF) weather. Since I was mostly packed and the apartment was clean I decided to wander around the Marina district, a place I’ve called home for the past few years.

Breakfast was a Denver style crepe at Squat and Gobble which I ate outside watching the waspy moms running around doing their errands. Let’s just say it was a sea of Lululemon and McLaren strollers.

After breakfast, I made my way to the Palace of Fine Arts which has always been a favorite spot of mine to sit and reflect on what’s going on in my life. The view today didn’t disappoint. 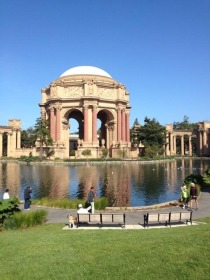 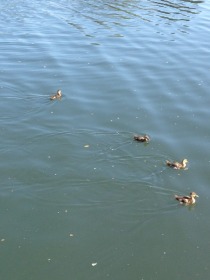 After walking around looking at ducks, turtles and tourists I headed down Baker street to admire my favorite sight in San Francisco, a landmark I’m lucky enough to get to see practically every day.

Honestly, few things I’ve seen can compare and I probably have 1,000 pictures of it in my photo galleries. Clear, foggy, rainy, doesn’t matter. It always looks beautiful and is a great icon and feat of engineering.

Wandering done, it was back to my house to give it the finishing touches and pack the last bits into my very overloaded suitcases. It’s really amazing how little you actually need when it comes down to it. Definitely a process I learned quite a bit from.

At about 1pm it was time to go. My friend Kristin (who I owe several bags of Crispy M&Ms to) picked me up and we were off to In N Out Burger for a little treat. #1 Animal Style! Such a tasty treat. 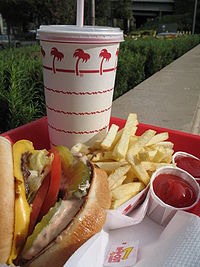 Arriving at the Southwest SkyCap I was a little nervous to see if my big bag was going to pass under the 50lb maximum for both Southwest and Qantas. A $5 to the SkyCap cleared my 50.5 lb bag. I guess the olympic lifting trying to weigh it on my bathroom scale paid off.

I arrived a little early so I secured a comfy corner seat to wait the 2 hours for my flight to LAX. Looking up I saw my buddy Pat walking down the terminal. I guess he was off for a weekend in Vegas. He kept me company for a bit until he realized they were paging final boarding for his flight and he sprinted off. We were able to get a quick pic before he left though.

The flight to LAX was quick and uneventful. Once I landed, I called my buddy Preston who was on his way to grab me for dinner while I waited for my 10pm departure.

I grabbed my bags from baggage claim and made my way the 1/2 mile from Southwest to the International terminal. The Qantas checkin people gave me some crap for wearing SF Giants gear but allowed my slightly overweight baggage on without much drama.

I’d heard from several people that the Mexican food in Aus is crap so we went to one of my favorite spots, Playa Cantina, in Playa del Rey for what I expect to be my best Mexican food for a while.

After gorging myself on chips, guac, fish tacos and a strong margarita it was back to LAX to get ready for my 15 hour flight to Sydney.

That’s all for now, but I’ve arrived in Sydney and can finally say that the reality of the move is settling in.

2 thoughts on “Making my way to Lucky Country”